Launching Your App – A Pocket Guide to App Stores 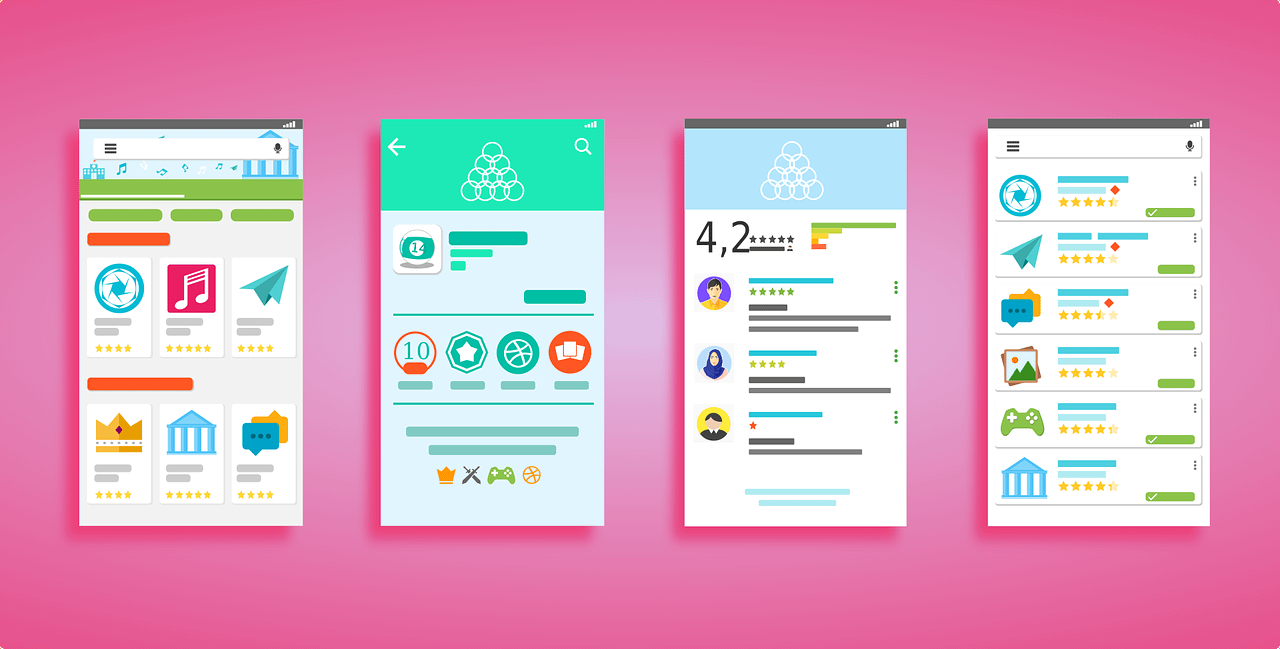 When building a mobile app, the majority of our clients will spend some time researching their target audience and considering which market place they’d like to launch on. This is a big decision which is made early on, as it impacts your development route from day one.

Although there are over 300 app marketplaces, typically our clients will have decided they want to launch across the 3 most popular marketplaces for apps: the App Store, Google Play, and occasionally the Amazon Appstore too. There are advantages, disadvantages and nuances to each of these, so we’ve put together a short guide on what to expect from each.

The App Store is the sole marketplace for Apple users. Apps can be launched on the AppStore and distributed to users across iPhone, iPad and Mac. With Apple devices constituting over 22% of all smartphones sold worldwide, and an enormous 53% of the US and 49% UK market, the App Store is an important marketplace to consider.

Aside from the large market, Apple also provide opportunities for extra visibility on the App Store, such as categories like “Popular” and “App of the Week”, which can further boost your app’s downloads.

In order to release your app to users with Apple devices on the AppStore, you must first sign up for an Apple developer account and pay a membership fee of $99 per year. You will need an Apple ID to sign up, and organisations will need to be verified using your D-U-N-S number (one-person companies are able to skip this step), website etc. Make sure to do this well ahead of time in case there are any hiccups in the process.

Once you submit your app to the AppStore, it is then subject to approval by Apple’s App Review team. Gaining app approval on the iOS App Store can be tricky. The process can take a while and sometimes apps are rejected for the slightest errors. The review process on average takes 2 days – Apple state that 50% of apps are reviewed in 24 hours, and over 90% are reviewed in 48 hours. Historically it was quite normal to wait between 7-10 days for the app to be accepted (and then the same amount of time if it was rejected and had to be resubmitted), even if the reason for an update was a minor bug fix.

There are various options for monetisation on the App Store. Typically Apple users are more likely to pay to download an app than Android users and pay more in general while using apps. This means there is good potential for app monetisation through app sales, in-app purchases, subscriptions and freemium models.

However, Apple will take a significant chunk of any app revenue through in-app purchases – typically 30% of the purchase.

Android makes up 76% of the global mobile market, so getting your app in front of Android users is an important consideration. As the original Android marketplace, the Google Play store has more than 2.7 million apps which are distributed to any Android device. While there are many other Android marketplaces, this one guarantees you the most visibility.

Google Play is the main marketplace for Android users Europe and the US. In order to launch on Google Play, there is a very simple process of signing up for a Google developer account, with a small, one-off payment of $25. After this, there are no additional charges required in the future, regardless of the number of apps you publish.

The app submission process for the Play store is known to be much less tedious than the AppStore. A less strenuous, automated review system and fewer rules mean that the process is quick, taking a matter of hours – typically from 1 to 7 hours for your app to be reviewed and published (the downside to this is a huge proliferation of low-quality apps).

The majority of apps on the Google Play store are free, and Android users are generally more likely to download free apps as compared with iOS users. However, this does not mean that you cannot monetise your app. App developers on Google Play typically gain revenue through in-app ads, sponsorship, freemium models and free trials. Like Apple, Google also takes a 30% cut of any in-app purchases taken through your app.

If you are planning to publish paid apps, you will need to create a Google Wallet Merchant account to receive payment from Google for apps that you sell.

The Amazon Appstore launched in 2011 and is Amazon’s primary way of distributing apps for the Kindle Fire tablet, phone, and Amazon Fire Stick etc. It comes pre-loaded on those devices, and also works on Android-based phones and tablets from other manufacturers. For that reason, this is a good option for those targeting a full range of Android devices, including the popular, competitively priced Amazon devices like the Kindle Fire.

It is often possible to submit your Android app on both Google Play and the Amazon Appstore without making any changes to your app. In some cases, 3rd party services might not be available on Amazon. For example, if you use Google Maps in your app, you will need to replace this with an alternative. If you are unsure, ask your developers to see if this is possible.

In order to release apps to the Amazon app store, you will have to create a developer account. However, unlike Google Play and the AppStore, creating an Amazon developer account is completely free of charge. This process is fairly quick and pain-free.

In terms of the speed of the review process, Amazon lies somewhere between Apple and Google Play. While Amazon does not provide estimates as to how long it will take for them to review apps, on average, they typically take 2-3 days to approve an app or app update. However, it could take as long as 2 weeks.

Like with Google Play, most Amazon users will prefer their apps to be unpaid and free to download, so similar strategies such as Freemium models should be utilised. Like Apple and Google, Amazon also takes a 30% cut of any in-app purchases made through your app.

You may ask what about the other 300 stores that we mentioned at the start? Because of Android’s open nature, there are some alternative stores that are country, manufacturer and operator-specific. Due to Android’s huge population, quick economic growth, speed of mobile adoption and the fact that Google Play is banned in China. This particular market is considered the strongest, but also very different to anywhere else in the world (Tencent, Oppo, Huawei and 360 Market being the biggest players there).

We hope that this pocket guide has given you some insight into the differences between each of the marketplaces. Every app is different and the process is never the same. Your developers will be able to talk through all of these considerations before you start your project –  The important thing is to assess your market and how you plan to monetise your platform before you start any development.

For other considerations before starting a digital project, check out our 7 handy tips here.

If you have any questions about releasing your app and the different app marketplaces get in touch today for a chat with one of the team.