We are excited to announce the launch of the Dirt School digital platform, an exciting mobile and web platform that allows mountain bikers to access online coaching from anywhere in the world.

Dirt school first approached us in 2013 with the aim to create a prototype app for their company, a leader in mountain bike coaching. We immediately saw the potential, and through an initial series of funding vouchers, were able to produce a working prototype. Since then Dirt School have continued to work with us to produce not only a mobile app, but an entire online platform that allows them to go global.

The concept is simple. Mountain bike coaching in your pocket – get quality dirt school coaching with their unique coaching methodology, without the limitations of geography, introducing an exciting proposition and revenue stream for Dirt School. One of the key features of the app is the ability to upload videos directly from the app to the online coaching section of the website, where coaches are able to provide 1 to 1 coaching feedback.

As with all projects, over time much has evolved, and we have gone through several design and UX iterations. We have also grown considerably as a company with this project, and have learnt some lessons the hard way that we would like to share with you.

The number 1 lesson we have learnt as a result of this process has been the importance of real-life user testing. Despite days on end of in-house testing, we could not have foreseen some of the issues that resulted from real life testing, and this was a huge learning curve. If in doubt, always conduct a soft launch with some trusted, real users before going public

One thing we hadn’t foreseen was that users would hold the phone differently from us. When you shoot video, or even take a photograph in landscape, the home button should be on the right. This is because computers read the meta data of the image/video, and use this assumption to indicate that what way is up. Hard to get your head around I know, but basically, if the home button was on the left when you shot and uploaded your video, it would appear upside-down. Weird huh?! To help users out, we encourage users to turn swivel their phone so that the button is to the right before using the skills section of the app.

For months on end we tried to solve an issue with how our in-app videos were displaying, and believed there was a mysterious problem with playback. It turns out the video example we used was glitchy. Doh! When you find a problem, make sure you check all potential causes before assuming you’ve found a bug.

User experience was a big learning curve throughout this project. After several design and UX iterations, there were some things that we had to accept were generally more user friendly, even if they weren’t always our cup of tea. For example, we loved our transparent icons for video control, but some users found them hard to see, and a white background was needed. At the end of the day, accessibility should always be a priority over style. Again, test with real users, and more importantly, listen to what they have to say. 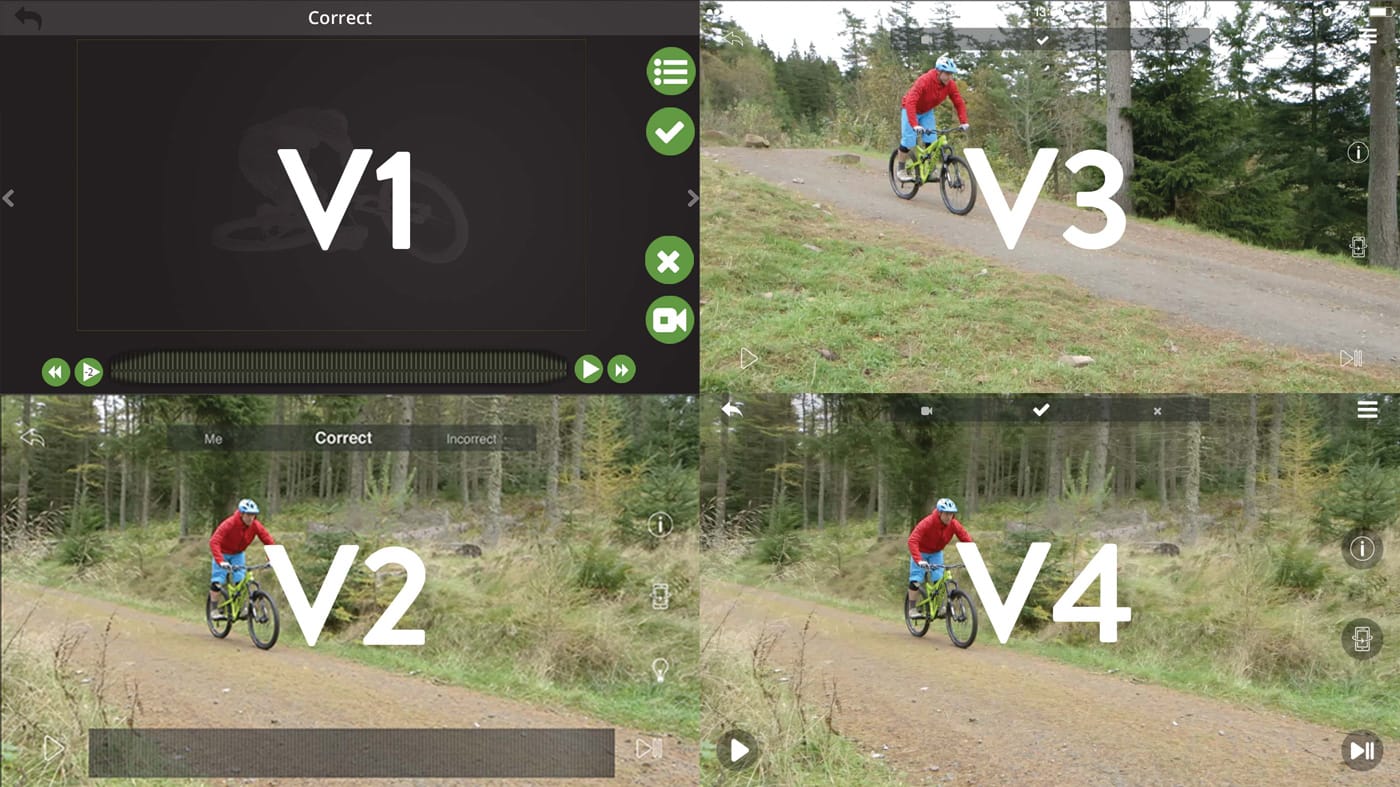 Working on the tutorial we found that while we provided more information to users with descriptive text, after copious testing we found that people just weren’t interested. They say images speak a thousand words, and in this case so do gifs! As soon as we incorporated a more visual tutorial, people started to pay attention! Also, we started off using thumbs up/down icons to show correct/incorrect examples, but found that  this is so explicitly associated with Facebook that we had to rethink our iconography.

After a point we had to start clearing out our old “final” versions and bug lists, there were just too many to keep track of. Testing is unpredictable, and as things evolve and scope changes, final deadlines tend to slide. Having clear actions, goals and milestones is important, but be prepared for delays when you get to the end of a project.

Seeing as this process began back in 2013, we have become quite attached to what we have built. Sometimes it was difficult to let go of things we had been working on for so long, but were simply not the way forward. A key example of this was a scroll wheel we had developed to allow users to navigate to an exact point in a video to precisely compare examples. With such short video examples, and with so many other icons on the screen, it became apparent that this wasn’t needed… after over a year of commitment to concept. Sometimes you must let it go.

Our first time working with an international team, communication was paramount to keeping momentum with development. Our fantastic back-end developer Abdullah was based in Saudi Arabia for the duration of this project, and with Dirt School jetting off around the world to compete at various events, we had to ensure that we kept communication open between Abdullah, the Dirt School guys and ourselves. We found lots of tools to help manage this, including Asana, hipchat, Google hangout, and good old emails.

Things aren’t always sunshine and roses, and if nothing else we have learnt to persevere, keep going and always keep the final goal in sight.

While the ‘project’ may be over and Dirt School digital has launched, we all know that this is merely the beginning. We are looking forward to an on-going relationship, and have plans for future updates, adjustments and support for the growing platform. Overall, we are delighted to have gone through this fantastic experience with Dirt School. Thanks to a combination of their vision and expertise and our teams passion for all things digital, we have truly created something brilliant. I urge everyone to download and use the app, whether you are seasoned on the hills or just starting out, there is certainly something beneficial for everyone!