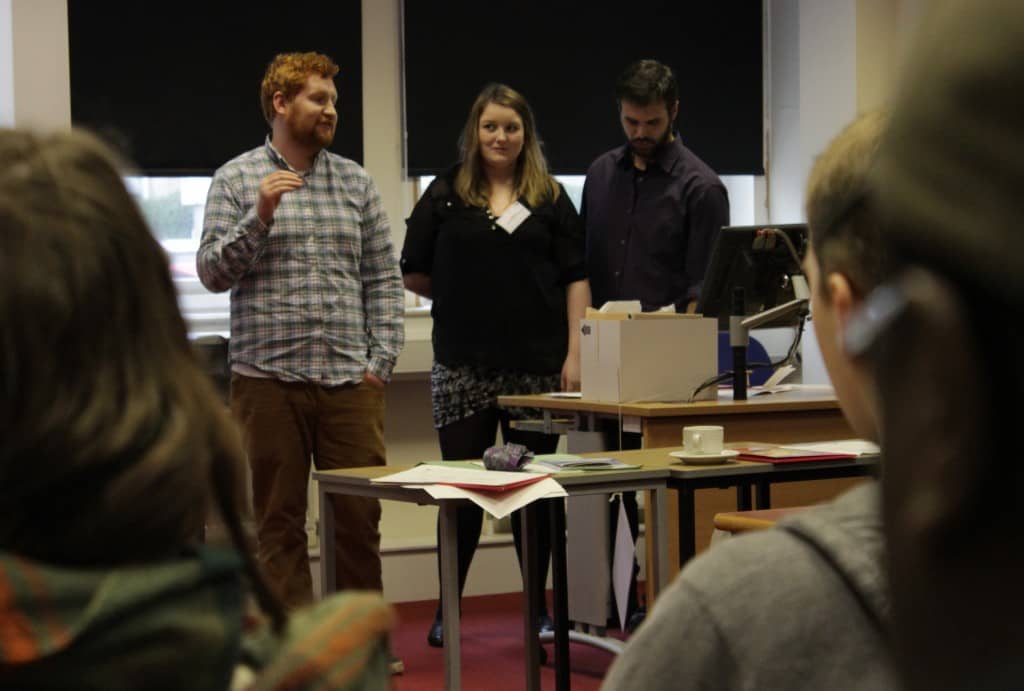 Before Christmas I was asked if I would like to talk at the 2014 Student conference as part of Napier’s employability week. I tentatively agreed, thinking it might be good to stick our necks out and show our peers an alternative, viable career option. In the run up to the conference Colin Smith, my old web enabled business lecturer and organiser for the event, sent over the speakers notes, and I was instantly filled with nerves and dread at the thought of speaking next to such inspirational professionals.

These speakers included Alan Ainsworth, a KTP associate for Scottish woodlands, who managed to juggle his Knowledge Partnership and his studies towards the end of his degree and continued working there afterwards. We also heard Daren Stewart, a workaholic who worked through college to get to university, balanced part time jobs, lecturing, dissertations and finally his internship with Skyscanner to finally nab the position of graduate Software Developer. We also heard Paul Valis, Software Developer for G3G3, who spoke about experience in the world of gamification.

Last but not least we heard from Jamie Graves, CEO and Founder of Zonefox. Jamie, like us, decided to build his own security company after studying his PhD in computer Science at Napier University. He spoke of his journey, how he has ended up where he is today, and how his role in the company has changed, allowing him to spend less time coding and focus on spreading the word about his product.

As this conference was part of the employability week, there was a huge focus on getting the graduate job. A lot of questions revolved around interview and recruitment processes, finding work placements and getting the right balance between studying and working.  Listening to some of the “recruitment horror stories” highlighted the deficiency in the job market at the moment, the importance of being proactive in finding work experience and the need for events like the Napier employability week. However, we wanted to put forward our alternative route to success – starting up on your own.

From speaking to people in the room before we went up, we gathered that there were a few people in interested in starting up their own business of some description or another. This was a great motivator for us, and we wanted to give the best advice possible. Our main advice was:

We discussed some of the challenges we have faced, including working and communicating long distance and our struggles with balancing cash flow and creativity. Our main advice on this was that while you need to provide services for clients to keep the cash coming in, its important to always maintain the creative side to your work, even if it’s just 10% of the time. On the other hand, sometimes working on something less creative can inspire you and give you new ideas, so don’t shun simple development work for it’s lack of innovation.

One thing we are proud of at GearedApp is that since starting we have always had a positive attitude, and this rubs off on our clients. This is fuelled by our enjoyment of what we do. We may build apps and spend most of our time staring at computer screens, but we get satisfaction from seeing the end result – a digital solution with will help grow a business and a happy client. Start-ups are not for the feint hearted, but at the end of the day, it’s worth it if you enjoy it.

The conference was followed by a networking event where we got a great chance to discuss intern opportunities with some of the university staff and academics, which has help greatly in our hunt for new interns. We also got a chance to chat to the other speakers, which escalated to a night in the pub. It was great to get chatting to other likeminded people and we hope this will lead to some collaborative work in the future.